Lithium-sulfur technology has the potential to offer cheaper, lighter-weight batteries that also offer safety advantages. After initially finding use in niche markets such as satellites, drones and military vehicles, the technology has the potential to transform aviation in the long-term. Electric aircraft offering short-range flights or vertical take-off and landing (including personalised aviation and flying taxis in cities) are distinct possibilities by 2050. The UK, which is already home to established lithium-sulfur battery manufacturers and to leading academics in the field, has a great opportunity to be the global leader in this ground-breaking technology.

Lithium-sulfur cells are most appropriate for applications that require high-energy rather than ‘power’ cell [14] applications. Despite this, the potential markets for Li-S are extremely broad. As with all early stage technologies, the initial deployment of cells over the next five years will likely be in niche markets including satellites, drones and in the defence sector for both personalised power and heavy vehicles. In these areas, the benefits of the lightweight nature of the cell exceeds the current comparatively high cost of manufacture (approximately £200 kWh-1). [9] However, as the technology matures and economies of scale reduce this price, Li-S will find wider use in the vehicles sector. 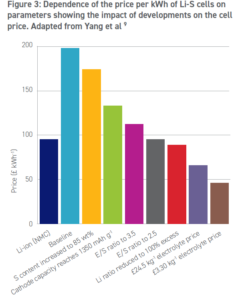 As illustrated by Figure 3, the cost reductions that will be seen for Li-S batteries will arise from both technological and economic advances. Developments in the cathode, including reducing the amount of conductive carbon and increasing the sulfur content alongside a reduction in the amount of electrolyte required in the cell (the electrolyte to sulfur ratio or E/S ratio) and the fabrication of thin anodes to reduce the excess Li in cells may yield a 55% reduction in the cost compared to the current baseline. In parallel, the commercialisation in Li-S cells will reduce the current high costs of approximately £48.50 kg-1 associated with the manufacture of the electrolyte. Should this cost reduce to closer to that of Li-ion electrolytes (£3.30 kg-1) a further 22% cost reduction compared to the baseline case could be achieved.

The first deployment of Li-S cells in the context of transport is likely to be in heavy vehicles, which require enhanced gravimetric energy density, for example, trucks and buses, which have the space to accommodate relatively large cells. A recent announcement by Li-S developer Oxis Energy has outlined a plan to replace all diesel-powered buses in Brazil over the next 25 years.[15] Improvements in the power density of cells and a corresponding increase in volumetric energy density may enable deployment of Li-S technology in SUVs and light commercial vehicles either as the primary power source or in a hybridised unit. The expected low cost of the cells may also enable Li-S to be competitive with the lithium iron phosphate and Na-ion cells in two- and three-wheel vehicles, which comprise the majority of electrified transport in the developing world.

Li-S as a Transformative Technology – ‘Electric Aviation in 2050?’

One of the most promising markets for Li-S cells is in the electrification of aviation, with substantive decarbonisation benefits arising from the transition from fossil-fuels to battery technology. The aviation industry accounted for 2.4% of global carbon emissions in 2018, with emissions set to treble by 2050.[16] Li-S cells are likely to be particularly used in the electrification of short-range aircraft, which is expected to have a sizeable operating market in domestic and short-range flights by the middle of the century. Indeed, UK government projections indicate the hybrid-electric aviation market could generate up to £4 trillion in the period to 2050.[17]

Prior to the COVID-19 outbreak, the UK saw approximately 520,000 domestic flights per year, with these typically being less than 500 km. Short duration flights are among the least environmentally friendly per passenger km [18] due to take off being the most power intensive phase of a flight. Indeed, a short or domestic flight emits approximately 180% of the quantity of CO2 per passenger km of a medium or long-haul flight.[19]

As well as playing a role in the decarbonisation of aviation, Li-S batteries may facilitate emerging technologies including vertical take-off and landing (VTOL), which offers the potential of personalised aviation and flying taxis in urban areas. The increasing commercial adoption of Li-S cells will be of great benefit to the UK’s historically strong aviation sector, which ranges from global manufacturers to SMEs and has been estimated to provide £22bn annually to the UK’s GDP.[20]

The UK-based Li-S developer, Oxis Energy has targeted a cell level energy of at least 500 Wh kg-1 by the end of 2020.7 Wider spread manufacture of their technology is expected with the imminent opening of a battery production plant in Minas Gerais in Brazil [21] and plans to open a plant to produce electrolyte and cathode materials in Port Talbot, Wales which will begin operation in late 2021.[22]

The challenges in manufacturing Li-S cells across all components has, in the past, led to companies using core technology in Li-metal anodes, developed with Li-S in mind, with Li-ion cathode materials to form a cell. Sion Power have released their Licerion® technology, which claims 500 Wh kg-1 in a rechargeable cell.[23] A similar technology has been developed by PolyPlus that uses a thin glass layer to protect the Li anode; the company are also active in Li-S electrolyte development and project battery performance to be over 400 Wh kg-1.[24] Bodi Energy also maintain an interest in the development of Li-S electrolytes through their combined electrolyte/separator technology. Of the major Li-ion companies, LG Chem has the most substantial patent portfolio in the Li-S field; however, as yet, it has not released any Li-S products.

At this early stage of commercialisation of Li-S batteries, the UK has an opportunity to become a global hub for this technology. As a nation, the UK boasts established Li-S manufacturers, some of the most recognised academics in the field and the Faraday Institution’s LiSTAR programme, which acts as the main focal point for research efforts.

Beyond this however, there is huge scope to link early commercialisation with established businesses including the aviation and automotive industries. The wider manufacturing requirements for Li-S cells are also well supported by an existing industrial eco-system, with the UK having a recognised expertise in the design of high-quality materials. Finally, the high-quality systems engineering capabilities that support current manufacturing are well placed to support the design and construction of Li-S battery packs and enable the rapid implementation of developments. By taking advantage of the existing strengths and encouraging cross-sector work, combining academic and industrial expertise, the UK is in a strong position to be at the forefront of this emerging market over the next 20 years.

14 ‘Power’ cells refer to cells that have the ability to deliver large currents per unit density i.e. Watts per kilogram (W kg-1) 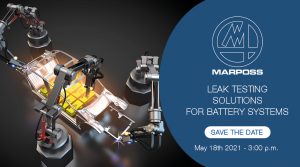